Tomsk Region is a land rich in historical traditions and with a unique Siberian nature. It is located on the picturesque shore of the River Tom (latitude 56° North).

Tomsk is named after the river it is situated on. The word “Toom” (now it’s Tom’) in the indigenous Ket language means “the river”. The meanings of the idea and the name coincide. It may be assumed that the Ket had in mind the idea of Tom’ as a main river, a big river, the centre of life. The history of Tomsk leads us into past centuries. Tomsk was founded in 1604 and is the oldest educational, scientific, and innovative centre in Siberia.

The 7th of October 1604 is considered to be Tomsk’s birthday. At the beginning of the 20th century Tomsk had the largest number of educational establishments of any Siberian city (there were 104 of them) and was considered the educational centre of all of the Asian part of Russia.

Tomsk is one of the oldest Siberian cities. It is a cultural and educational center boasting the original appearance and special atmosphere of a university center. The Tomsk Imperial University (currently Tomsk State University) was the first, and for a long time the only, higher education institution in the Asian part of Russia. Neither Moscow nor St. Petersburg has as large a proportion of students and scientists as Tomsk has. Therefore, despite its respectable age the city is strikingly young. Guests of the city are always welcome and have a chance to feast their eyes on the city’s distinctive architecture and the wooden carvings of ancient houses, get a glimpse of cultural traditions and experience Siberian hospitality. It is often cold in Siberia, but at Tomsk State University it is always warm and cozy. Tomsk is a large educational, research, and innovation centre in Siberia, home to 8 universities, 11 research institutes, 5 business incubators, the Technical Innovation Special Economic Zone, as well as more than 25,000 organizations and companies, 11,700 small businesses, more than 3,000 shopping centers and stores, more than 80 schools and grammar schools, and 60 cultural and entertainment organizations.

The cultural life of the city was also active: there were 4 newspapers, 4 theaters, 5 cinemas, 7 libraries, and 3 amusement parks. As a result of this, Tomsk solidified its nickname as the “Siberian Athens”.

Now Tomsk is still a city of students and scientists: there are 9 higher education institutes, 15 institutes for scientific research, a technology development special economic zone, and 6 business-incubators.

The city is rich with wooden architecture and stone monuments of the 18th to 20th centuries. Novosobornaya Square is regarded as a centre of the city, with its public garden, fountain, and memorial dedicated to the student’s patroness Tatyana.

In 2004, Tomsk celebrated its 400th anniversary. On the eve of the anniversary, the city was transformed, becoming the intellectual, architectural, and cultural capital of Siberia. Today, Tomsk stands as a city of historical traditions, respect for and interest in antiquity, and it is also the city of youth, where every inhabitant is a person with a great future and every fifth resident is a student.

The wooden architecture of Tomsk is recognized by experts as a unique worldwide cultural and historical phenomenon. There are about 1,800 wooden houses in the historical district of the city. In addition to the architectural monuments, there are plenty of interesting sights in Tomsk and its suburbs associated with the history, culture, and natural surroundings of the region. The sights of the Tomsk also include the University Park in which or adjacent to which is a series of buildings of TSU and the Siberian State Medical University, as well as some research institutes. It was established in 1885 during the construction of the main building of Tomsk State University (Imperial Tomsk University at that time). On the territory were planted either softwood trees, such as spruce, fir, pine, and others such as cherry, elderberry, viburnum, etc. Later, we see the plantation of trees imported from Europe, North America and the Far East: the elm, English oak, small-leaved lime, and Saskatoon. Just after entering through the main gate, there is an open space for lawns, flower beds, paths and trails in the park. The central walkway leads to the main building of Tomsk State University. The Stone Women stand here, rocks created in the first millennium BC in the mountains and steppes of the Altai-Sayan region and Kazakhstan and brought to Tomsk by the first scientific expeditions from Tomsk State University, more than a hundred years ago. The Park is separated from Lenin Avenue by a stone wall and railings, along which runs a row of trees, forming a boulevard. In Tomsk there are a large number of monuments, some of which are quite surprising and unusual. One of them, the Monument to Happiness by the sculptor Leontiy Usov, is located on Shevchenko Street. If you press a coin against it, he’ll say some phrase from the cartoon Once Upon A Time There Was A Dog. A number of original monuments were created by Tomsk sculptor Oleg Kislitsky: the monument to an electrician near the Gorelectroset building, the Cabbage Monument at Hospital Number 1, and the Monument of Slippers at the entrance to Hotel Tomsk. 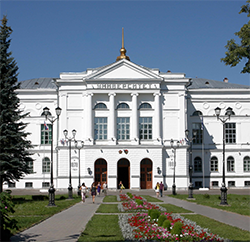